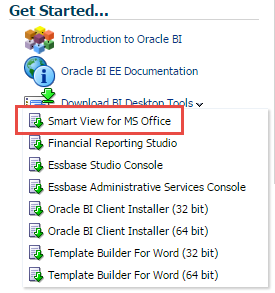 Since the release of 11.1.2.5.520 we can now user Smart View with Windows 10 and Office 2016. I always suggest to keep updating your Smart View as this is the Oracle’s Strategic Office Integration Tool.

Fixes in this release:

19062362 — Starting with release 11.1.2.5.410, when ad hoc analysis is performed on a Smart Slice, the last cube view context is sent to the provider server for all sheets in the workbook. When trying to create a function on the next sheet, the Member Selection dialog box will show only the members in the Smart Slice.

21803394 — On Office 2007, 2010, and 2013, when connected to Oracle Hyperion Financial Reporting, Microsoft Word suspends no longer terminates unexpectedly after inserting function grid, and then inserting a slider.

Being in the EPM & BI field for more than 8 years, it's about time I contribute to newcomers! As a founder of MondayBI.com I wish to give you all the help I can. Feel free to give any suggestions or questions. Hope you will all enjoy this blog! William Wong Essbase Certified Specialist OBIEE Certified Specialist View all posts by Steve Yeung